The outcome of the US election is crucial to Ireland’s future – many of us know why.

Many of us also know that he entire Covid scam has alot to do with this election.

Anything that stands between the radical left, and power, they seek to destroy. You won’t see reviews like this in Irish mainstream media, because everything they say is biased – sad but true.

You may remember the late Marian Finucane devoted three hours every weekend to attacking Trump with liberal Irish cucks, on fake news RTE.

And why have they been attacking Trump for four years? Because he is taking back the outsourcing gravy train to America. That means manufacturing jobs in Europe, and China are going back. Pharma jobs are going back.

This is why European and Irish governments have been so willing to almost destroy their local economies for a bad flu (we all see the stats, we all know they’re lying).

The pharmaceutical industry in Ireland makes up over 50% of our exports. They also pay alot of wages, and thus income tax. Their employees also prop up the over inflated property market, which keeps our TD landlord class, and their Developer and corporate backers, in the money.

If Trump takes back pharma production (90% of what we make in Ireland in pharma, is exported to America, made by mostly US companies here for the tax rate), alot of Ireland’s elites are going to lose out.

Do you see? Now extend the above to Financial services (half may go).

They (our government, and mainstream media, and our EU controllers) hoped that by depressing international markets, they would remove the source of Trump’s power – the roaring US economy. Thus stopping him being re-elected, and keeping those industries in Europe. It’s not quite panning out that way.

If Trump wins (and he will win), their gamble will have failed, and the Irish people will know exactly who to blame for them. This is the price we will pay for not developing our own indigenous industries, and keeping hold of our fisheries, that were signed over by a corrupt Fianna Fail party in 1973 for some magic beans (CAP payments). 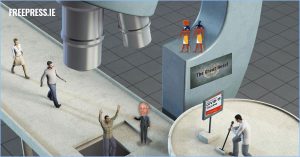 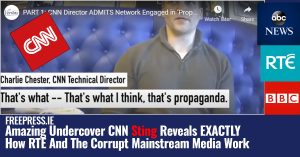 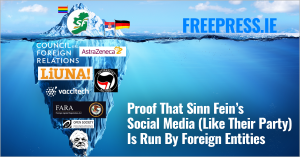