I have been shut down on Social media, so rely on readers to share if you can, thank you.

Get this into non-protest groups and in front of kids, kids are smart, they’ll understand – football groups, GAA groups, knitting clubs, anywhere outside telegram. Stop targeting parents, we have reached a plateau. Get out of the echo chambers. Email it to companies. Send even one email to someone. You might save a child’s life. Share the rumble video primarily, it can’t be taken down.

New readers – are we selling anything? Looking for donations? Alternate Covid cures? Do we have ads? The answer is NO. We have NOTHING to gain from lying to you. Think.

This is Exclusive Undercover footage from an Irish Vaccine mill last month, where the undercover, under the guise of the Irish Prime Minister’s media department, manages to announce to the waiting sheep that the vaccines are all experimental – our brave insider told us that ALL sheep remained and took the experimental jab, despite the announcement….

Besides telling them all it’s experimental, he also tells them what they can (and cannot) say to the Taoiseach (the Irish Prime Monster), just before he is to arrive at the vaccine centre for a photo opportunity. No inconvenient truths are allowed.

Does our boy get caught? Does he get rumbled? How does it end? You’ll have to watch and see.

Let’s make the rumble video go viral. Get it out everywhere. There’s a downloadable video in the telegram group, linked above. This WILL help wake people up – Vaccine centre staff didn’t say a word when it was announced that the vaccines are experimental. And there’s plenty more in there to shake people from their hypnosis and faith in the corrupt Irish establishment.

These vaccines are still in an experimental stage under Emergency Use Authorisation (EUA). See here for example, the Astrazeneca trial will run until 2023, by their own data. The same with Moderna’s. And the US’s official vaccine injury data shows massive damage already caused, with tens of thousands dead. And that’s just the ones that were reported.

There is no great conspiracy (probably). They demonised Ivermectin and Hydroxychloroquine as viable cures for any cold virus because they are off-patent and the drug companies can’t make any money from them. It’s that simple! It’s about money! They can’t make money from drugs that are no longer patentable (patents last about 20 years for Drugs, then the inventors make nothing from them).

Israel’s daily updated data shows that the vaccines are completely useless in relation to Covid – but they do seem to be making people extremely sick. Asymptomatic spread was never a thing, and there was never any serious science to back the use of masks – even the CDC said so.

In 2010, the definition of a pandemic was changed by the WHO. They did this after the swine flu vaccine scam failed. This was documented in 2010 by the British medical Journal here, it is fact.

They removed the words “enormous sickness and death” from the definition. This is what allows our pharma owned politicians and media to use the word “pandemic” ad nauseum with total immunity (pun intended). The common understanding of the word ‘pandemic’ is of course far from this altered definition – when we hear ‘Pandemic’ we worry and become afraid and become more controllable – they knew this. Every despot since Nero knows this, and many of them still ultimately come to a Nero’s end.

This false pandemic trick was one of the many little pieces the almost-bankrupt (from Opioid crisis lawsuits) pharmaceutical industry needed in place to make their long-planned covid vaccine scam a success.

The Irish authorities and media are HIDING all of this from the Irish people, who have been gaslit and fear-driven into trusting them this past 18 months, despite their ruinous track-record in looking after the health of our people.

They deliberately put you, the Irish people, in fear, and they gained power over our people’s minds with the simplest mind-controlled technique of all – repetition.

We must help our people take their reason and innate goodness back from these monsters.

The Covid scam has been the crime of the century so far – run by an industry that has been deliberately destroying people’s health for profit for over a century (see below), and one that makes no profit from curing people of anything.

Key takeaways from the video

Still unsure about the vaccine? We are not selling anything here – what do we have to gain by lying to you?
Watch this video below – WAKE UP, and remember: these companies make no money curing people of anything. If it’s free you are the product.

If you’re a parent and you don’t watch this link, you are neglecting your children and may be an abuser: Watch: Why Kids Must Avoid the mRNA COVID Shot 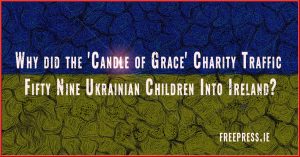 Why did the ‘Candle of Grace’ Charity Traffic Fifty Nine Ukrainian Children Into Ireland?