The Journal.ie’s lies about Great Barrington should be a warning to us all.

The Left-wing digital fish-wrapper, the Journal.ie, has now shut down narrative-questioning comments on their latest hit piece article attacking the truth.

The Journal ‘fact-checked’ a full-page irish-Times ad taken out by uber-successful Irish entrepreneur John Moore. It highlighted the Great Barrington declaration to the Irish people, and how we should be approaching running the country.

The propaganda piece was written by yet another of the Journal’s woke hipster child-‘journalists’, Stephen McDermott.

You can find useful-idiot Stephen McDermott’s disturbing attack on the truth linked here.

Just like facebook, the Journal are telling you how to think with biased ‘fact-checking’, to keep themselves in funding with Government Covid-ad money.

McDermott typifies most Irish journalists right now – taking the shilling and asking no questions. A useful idiot, not very bright. Democracy depends on a functioning fourth estate, and these people are utterly failing us.

And it’s no surprise – the creep of totalitarianism that they are helping to usher in abhors democracy.

As Yuri Bezmenov said, these useful idiots are always the first ones lined up and shot after the revolution takes over (his video is at the bottom of this piece ).

The Journal is now asking its readers to trust the opinions of hack Stephen McDermott (who has a long history of not reporting the truth on Covid), over the opinions of the entire Great Barrington declaration signatory body.

And who are the people McDermott says he is smarter than? Only 10,000 medical and public health professionals, as you can see here.

The Spectator, a media outlet with actual integrity, today asked the question: Why can’t we talk about the Great Barrington Declaration? The Spectator has questioned everything since the Covid-hysteria began.

If Stephen McDermott answered their question, he would probably say:

‘because if the Covid hysteria dies, I will lose my job… all my fellow journalists will never be trusted again after we failed the Irish people so badly, and anyway….I write exactly what i’m told to write’.

How stupid do the journal.ie think the Irish people are?

We outlined how Covid-ad money is the only thing keeping most Irish media outlets open right now as we explained here, because their own lies and journalistic deceit drove the economy into the toilet.

Stephen, like many Irish journalists, is lying about Covid. Because their editors are telling them what to write, and because they are putting their own financial and status interests ahead of the people of Ireland.

The journal.ie is a biased rag, now simply an extension of Irish Government NPHET Pharma policy. They do not tell the truth, and they shut down debate. Check out the comments section for yourself on that article.

And God forbid you might want to disagree with a comment on the Journal (when the comment-section is kept open that is) – they took away the option to down-vote comments years ago.

There is no democratic hierarchy in the comments – the authors themselves push their favoured comments to the top of the comments section.

The Great Barrington declaration is real, and it is a powerful weapon for those fighting the Irish Government lies, and media corruption witnessed every day on television and print media. We’ve seen a particularly insidious co-ordination of lies across Irish media in recent days.

You can find it here – Great Barrington Declaration.

Here’s another lying scientist, lying through his teeth, on national television, in co-ordination with other media outlets.

Gerry Killeen, of the esoteric mysticism department at UCC college of misdirection and non-science, lying and fearmongering & deliberately scaring elderly people on Matt Cooper’s disinformation show on May 25 this year:

And here he is last night on Matt Cooper, destroyed by the expert Ivor Cummins who demonstrates how Killeen is pushing more lies, and fear.

And look at that pathetic excuse for a human being, Matt Cooper, nodding and asking no questions when Killeen’s assertions are part of the lies destroying people and the economy.

He used to have integrity.

We’ll look into Gerry Killeen’s pharma-links, just like we looked into Luke O’Neill’s part in a vaccine scam they’re trying to perpetrate on the Irish people.

One thing we can say for now is, it is in his financial interests to lie as his lies are keeping Virgin media in Covid ad money, and he is being paid regularly to slither out from between the pillars of Boaz & Jachin to lie on Virgin TV.

The Irish people now need to cross the mental Rubicon. Many of us are just about there.

The fact is, the scam really is now THAT big.

The Irish Government are lying all the time to cover their mistakes, and the nursing home murders. The Media are caught in a vicious circle of lies and needing Covid-ad money.

The Experts they have outsourced Government to, ALSO need to cover their arses and help the vaccine scam into the bargain.

We are through the looking glass here folks. This is new ground, keep spreading the word, keep fighting these scumbags.

Yuri Bezmenov on useful idiots like Stephen McDermott – and don’t forget, we never censor or manipulate comments, we don’t manipulate social proof like the Journal.ie. 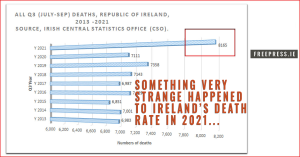